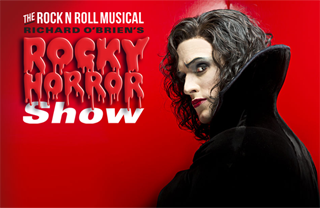 The first time I remember watching The Rocky Horror Picture Show must have been 2003 when a friend loaned me his DVD. I instantly loved it, I believe I watched the film about 3 times that night. I even had most of the songs memorise that night.

A few years back I was going to go see a showing of the films audience participation version, however my plans changed. So this year when I found out that the stage show was on at Birmingham’s New Alexander Theatre, I had to have a ticket.

Sadly being a Rocky Horror Virgin (first time at the show), I did not dress up as one of the characters - maybe next time.

Well here is the bit where I review the show…

I have to tell you the production was amazing. I didn’t think that the audience participation would be a major part in the stage show, but I have to say it really made the show special. It added an extra element of laugher and I was surprised to see that the cast re-acted to it. I have read that the stage show changed over the years to keep itself fresh, but when I spotted that a bit of Gangnam Style had been thrown into the Time Warp it did make me giggle.

Now remember: Don’t dream it… Be it…