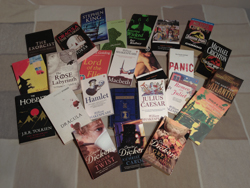 During my day outs I had falling into an odd habit, I would often stop at a motorway service station to stretch my legs. While there I would have a look around the convenience store, where I would end up buying a book.

I have now acquired a large pile of books that I have not read. So this year I’m going to read them.

Below is a list of books that I have either bought or have been given, I will mark them off as I have read them.

I do have a lot more books but these are my priority.