The Mistletoe Bride of Marwell Hall 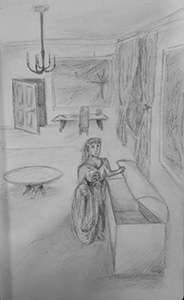 For Halloween this year, I thought it would be a nice idea to take my girlfriend on a ghost hunt.

After searching a few websites, I came across an interesting ‘paranormal evening’ in an intriguing place. Marwell Hall was previously owned by the Seymour family, and was frequently visited by Henry VIII. It is also rumoured that Henry VIII and Jane Seymour were secretly married here.

Having recently published an article titled ’The Line of Henry VIII’, it’s no surprise that visiting a house with strong links to the Tudors would interest me.

Anyway, this is more about the Mistletoe Bride than old Henry…

On a young woman’s wedding day, a game of hide and seek was played and the bride chose to conceal herself within a large oak chest. Unaware that the chest was self-locking, she became trapped inside. Her groom and guests frantically searched the property trying to find her, but her screams were never heard and her body was only disvovered years later. The sound of the guests searching is said by some to still echo the halls today.

I believe that the name ‘Mistletoe Bride’ came about because the wedding was supposedly close to Christmas, and as such the bride may well have worn a wreath on her head made from mistletoe – but this is just my best guess.

Our experiences during the ghost hunt.

The ghost hunt ran from 18:00 to midnight, with about 15 guests. During our time there I shivered on at least five occasions in different areas of the house. While I can’t really rule out the cold, my shivering felt more like what people commonly attribute to ‘someone walking over my grave’. While in one particular location – the Hospitality Room – we heard a distinct knocking sound. Later, during the group séance, the knocking returned when members of the group called out for a sign of any spirits present.

In another room the entire group attempted to make contact with spirits using pendulums - simple, small weights hanging from a piece of string. My girlfriend and I didn’t really pick up on any spirits (maybe we just don’t seem that interesting to the undead…), however a few other people claimed to have communicated with people in the afterlife. One of these was described as a woman who lived in the house, was married, and had three children – two boys and a girl. Later this was said to be Elizabeth Seymour, the mother of Jane Seymour. Another spirit was apparently named Anne or Annie, and was said to have communicated a pain in the left side of her neck and holding a secret that she would never divulge.

The guest who told of this encounter later attempted to reconnect with this spirit and mentioned another name – Henry.

I personally believe that these accounts are way too obvious to be believable. We all knew that the property belonged to the Seymour family and that Henry VIII had visited the house, so it’s no surprise that a number of people in the group seemingly took ‘inspiration’ from this.