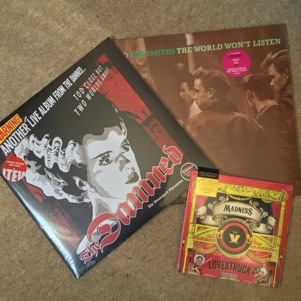 Record Store Day started in America in 2007. It wasn’t long before the record stores in the UK adopted the day. On this day every year some artists release unique, limited editions or re-releases, most on Vinyl occasionally on Cassette Tape.

This time last year my girlfriend and I had decided to attend our first Record Store Day, we were hoping to get our hands on the 10” glow in the dark single of Ghostbusters. Sadly my car broken-down which resulted in us missing the day – later that year my girlfriend gave me the vinyl as a present.

This year we had our sights on a few of the limited releases, however not all of them were in stock, we still managed to pick up a good haul:

Some of the records we missed out on:

Look through my complete collection of vinyl’s at vinyl.serith.com