I bought a guitar, again. 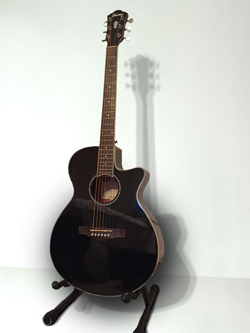 Back in something like 2004, I purchased an acoustic guitar from Argos, a cheap one, mainly because I wasn’t sure that I would stick to practicing. After a short while I realised that I wanted an electric guitar because the sounds that I was creating were not the face-melting sounds from my favorite rock songs, so I gave it away to a friend, then went to a music store and bought a starter pack, that included a black Fender Showmaster and amp.

Now with an instrument that gave me the sound I wanted, I was starting to pick up a few riffs. I found it tricky to work out the strumming patterns, and as a beginner my fingers were not ready for some of the chords. I slowly became bored of finding simple tab sheets and only learning a tiny part of a song. So the guitar got packed in its case and put aside.

A few years later an Xbox 360 game was release Rocksmith, it allows the user to plug in a real guitar and play along to songs in a guitar hero fashion, along with learning exercises and games to help speed up the learning process. I couldn’t wait I thought that this was it I was finally going to learn to play better, so I bought the game.

The game was really good, I was playing (badly) along with some songs, however it is a game, and I have many games, new ones are always being released, and so I stopped playing Rocksmith to play more anticipated games, the guitar got packed away again. Every once in a while I would have nothing to do and remember that I have a guitar, start playing some riffs and remember I suck then store it away again.

During a clear out I decided enough is enough I’m never going to play this stupid guitar, I’m throwing it away… I didn’t, instead I found it a new home with an enthusiastic guitar friend of mine.

Recently while looking through charity shops searching for vinyl’s I noticed some cheap acoustic guitars, which prompted me to think about learning for the third time. I asked my friend to pick out a few acoustics in a price range that I wouldn’t miss if I failed again.

After a few hours in a music store I bought my third guitar, for slightly more that I was expecting to pay. I found that the Ibanez AEG10II-BK Black was the best guitar for me as it has a thinner body than most acoustics, which makes me feel more comfortable playing it which I’m hoping will mean I will be willing to play more often.

I’m still planning on using Rocksmith to help me learn, and I have already started learning a few easy songs. However one of the songs that I want to learn is not included on the game: ‘Here Comes the Sun’ by The Beatles, I’ll have to pick that up from an online tab…

Well I better get back to practicing.