Who are the Justice League of America?

With the announcement of the upcoming Superman and Batman movie, it seems that we will not be waiting long before The Justice League has formed.

The League is formed of several crime fighting super heroes aligned for one purpose protecting the world from evil doers. The group originally included Superman, Batman, Wonder Woman, Flash, Green Lantern, Aquaman and Martian Manhunter. But has also expanded and other super heroes have joined the cause.

I have provided a bit of the back story of each member below, but please remember over the years some origin stories have been change, amended or redacted. (Earth-One and Earth-Two, what’s all that about).

So… Who are the Justice League of America? 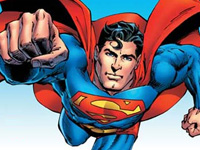 Sent from his home planet Krypton by his mother and father moments before its total destruction, baby Kal-El crash lands in rural United States. Jonathan and Martha Kent find and adopt baby Kal-El, giving him the name Clark Kent.

During his adolescence Clark starts to realise he is a lot different from other people. Learning of his what happened to his home planet, he became obsessed with protecting mankind and Earth. 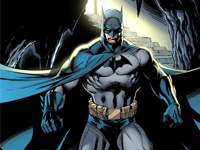 Witnessing his parents being murdered, kind of messed Bruce Wayne up a bit. Growing up and being a bit of an eccentric billionaire, Bruce decided to put a stop to all crime and underhand political dealings in Gotham City.

He chooses to instil fear in to the criminals of Gotham as a creature of the night, black, terrible… As Batman. 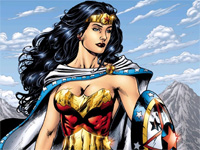 Diana, the Amazon Princess of Themyscira only goes and falls in love with the 1st man to set foot on her homeland of Paradise Island.

Winning the competition she was forbidden to enter, that meant she would be the one to take the man back to the world of men. She travels to America, takes the name Diana Prince a.k.a Wonder Woman and starts kicking the butts of Adolf Hitler’s buddies. 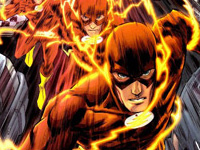 Barry Allen can’t really be late for anything again…

After a lightening bolt hits a case of chemicals soaking Barry, he soon discovers that he can run at tremendous speeds and has the reflexes to match.

So what to do with my new found speed? How about a speeding crime fighter that sometimes can travel back in time… 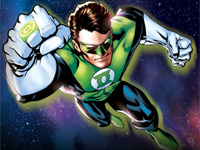 This risky test pilot took a risk that changed his life completely. He witnessed a glowing green alien ship crash land, rushing to the crash site he found a dying alien Abin Sur. Knowing he was about to die Abin Sur gave Hal Jordan a ring and a lantern, telling him he had been chosen.

Now being a member of an interstellar organization of police, he had a pretty big beat to walk (not only our Solar System but many other planets; full list of planets in Space Sector 2814 ). 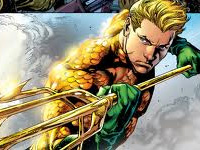 It must have been hard for Arthur Curry growing up. Half human, half Atlantean and also being heir to the throne of Atlantis.

At least he could breathe when the older kids flush his head down the toilet. 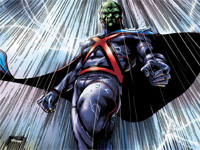 J’onn J’onzz was living the life of a care-free Martian, completely unware that about 6,778km away Dr. Saul Erdel was messing around with his communication device. Something kind of went a bit wrong… Causing J’onn J’onzz to be pulled to Earth by an experimental teleportation beam. “Err, whoops”.

With no way of returning home, J’onn J’onzz decided to become a private sleuth (a green-skinned extraterrestrial humanoid, not very sleuthy). Just don’t leave him alone with a box of Oreo cookies…

Hopefully we will be seeing them very soon…