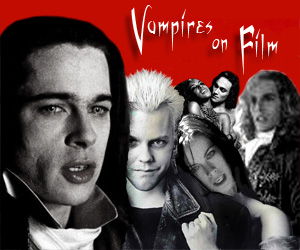 I’m not too sure which film I watched first but I believe my first vampire film was probably either Interview with a Vampire (1994) or Dracula (1992).

Since then I have became a fan of horror films especially the vampire sub genre.

I think the thing that drew me into the vampire world is the mysteries that engulf them. Hiding in the shadows, stalking their prey, waiting for the perfect moment to strike. To survive the vampire must drink blood, in doing so the life and vitality of their prey passes over, enriching the vampire.

I had heard that Whitby - a small harbour town on the Yorkshire coast, had become a bit of an attraction for Bram Stroker Dracula fans.

In the story the Count travels to England aboard the ship ‘Demeter’ which makes port at Whitby harbour. I have visited Whitby, mainly to see the impressive ruined abbey. I was gladly surprised to find a small museum dedicated to the novel/films.

My next step in the vampire world is probably to read The Vampire Chronicles by Anne Rice.

Below is a list of films that feature vampires: (the ones I have seen are in bold.)