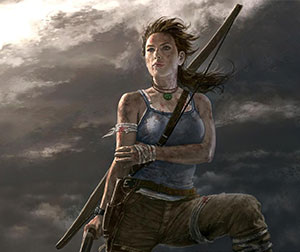 The new Tomb Raider game has now been out for a few weeks.

I would have liked to say that I sat playing the game all day until completion, sadly I did not have the time to do this. Having now completed the game, I feel comfortable writing this review about Tomb Raider (2013).

Right from the start we know that this is a Lara we have not seen before. She is embarking on her first expedition into the Dragon Triangle, a vicious storm tears the ship in two. Along with other survivors Lara is washed up on the shore of a strange island. Separated from her party she get forced to survive the environment and an array of enemies.

The gameplay is a big step from what we have experienced in the past games, literately throwing Lara around the environment; climbing onto building and jumping from rooftop to rooftop.

During the game Lara explores the island hunting for her friends. along the way she has a few artifacts that she can find scattered around; relics, GPS signals and documents from the past. Each area that Lara visits has at least one hidden tomb that she can raid. These are a bit of a let down compared to the ones in Tomb Raider: Legend and Tomb Raider: Last Revolution, they are too simple to solve and enabling the new ‘Survivor Vision’ make it even more easier.

By collecting artifacts, finding tombs and killing enemies silently (head shots / sneaking), you earn point that can be used to improve Lara’s skill level and upgrade weapons. To do this you will need to find one of the campsites, there are a few in each area.

I found some of the slow-motion user action sections a bit annoying but they don’t seem to be as bad as they used to be in the last 3 games. At least this time it only seems to use one focus button.

I would give Tomb Raider (2013) a rating of 7/10. If your an avid Tomb Raider fan then you should get this one and experience the new feel to the game along with the new look Lara. If your not to bothered about this new generation of Lara/Tomb Raider then I recommend waiting a while for the game to become a bit cheaper.