Through Dangers Untold and Hardships Unnumbered 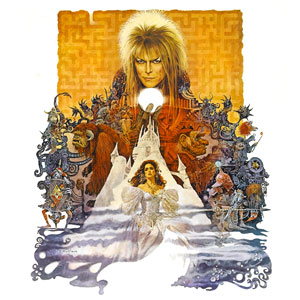 I haven’t fought my way through the Labyrinth, but have seen the film an unknown number of times. More than once I have watched this film to the end, left the credits rolling and then allowed the film to restart and watched it a second time.

Sarah (played by Jennifer Connelly), like a lot of 16 year old girls loves to play dress-up and submerge herself in to a fantasy world. Arriving home late, her parents leave her to watch over her baby brother Toby.

Annoyed with her parents and that someone had been in her room and taken her toy bear. She finds the bear in her parent’s room with her screaming brother Toby. As Sarah begins telling Toby a story to calm him back to sleep, she makes a wish for goblins to take the baby far away.

Sarah: “Say your right words,” the goblins said, “and we’ll take the baby to the castle, and you will be free!” But the girl knew, that the Goblin King would keep the baby in his castle for ever and ever and ever, and turn it into a goblin! And so the girl suffered in silence. Until one day, when she was tired from a day of housework, and she was hurt by the harsh words of her stepmother, and she could no longer stand it…
Sarah: I can bear it no longer! Goblin King! Goblin King! Wherever you may be take this child of mine far away from me!
Goblin: That’s not it! Where did she get that rubbish? It doesn’t even start with “I wish!”

We then meet Jareth (played by David Bowie), The Goblin King. He takes Toby away to his castle at the center of the labyrinth, setting Sarah the task to get to the castle within 13 hours to save Toby.

Along the journey Sarah meets an array of characters that either help or hinder her progress.

Hoggle: Oh don’t act so smart. You don’t even know what an oubliette is.

For those that wish to know… An oubliette (from the French oubliette, literally “forgotten place”) was a form of dungeon which was accessible only from a hatch in a high ceiling. The word comes from the same root as the French oublier, “to forget”, as it was used for those prisoners the captors wished to forget. - Extract from Wikipedia

Jareth: So, the Labyrinth is a piece of cake, is it? Well, let’s see how you deal with this little slice…

Sarah’s journey becomes slightly more challenging and confusing: The Bog of Eternal Stench, A Masked Ball inside a Crystal Ball and The Battle of the Goblins.

Sarah: Give me the child.
Jareth: Sarah, beware. I have been generous up ‘til now. I can be cruel.
Sarah: Generous? What have you done that’s generous?
Jareth: Everything! Everything that you wanted I have done. You asked that the child be taken. I took him. You cowered before me, I was frightening. I have reordered time. I have turned the world upside down, and I have done it all for you! I am exhausted from living up to your expectations. Isn’t that generous?

Jareth: I ask for so little. Just fear me, love me, do as I say and I will be your slave.

The Labyrinth is one of my favourite films. Jim Henson has made fantasy a reality in this film. His goblin creations are amazing and the puppetry is simply mesmerising. I even love the songs that David Bowie contributed.

I recommend you watch this film, whether you have seen it before or not.