I own a Vampire Tarot Deck by Natalie Hertz. Its stacked full of elegant vampires, bloodied fangs, full moons and desolate landscapes.

The Fool, numbered 0, represents the beginning and the end, this bat is extravagant, he represents eccentricity. He dislikes well established principles such as biting his victims. Instead, he likes to kill them with his claws, with no regard for their eternal life. The Fool Epitomizes disdain for convention.

This shaman bat’s menacing look embodies energy, attraction, power, ability, dynamism, vital force, and rebirth. In the background, wrought iron represents the for Minor Arcana figures: the cup symbolizes water and wisdom; the sword symbolizes air and bravery, the wand symbolizes fire and action, and the pentacle symbolizes heart and stability. The figure 8 over his head represents the infinity of time, and his soft black and blue dress symbolizes the depth and mystery of his being. Skilful and brave, this bat controls his own destiny.

A mysterious bat woman, dresses in black, embodies out hidden strength. The High Priestess represents everything that grows slowly. She is the guardian of truth, and brings a message from your subconscious. Listen carefully to yourself.

This noble bat woman represents charm, grace and feminine energy, which are symbolized by the rose she holds. Her clear but penetrating glace reflects acumen, dynamism, acquired knowledge, perception, inner strength , and authority.

A proud bat emperor, direct and determined, show a great inner force, order, rigor, and will. The blood flooding down is lips represents his male energy. A powerful king, he keeps everything firmly under control. Influential, he represents power and leadership.

Divinatory Meaning: A stable, mature, and positive person or a well-defined situation. Control of one’s own mind, strong relationships, and solid associations. Action; a goal attained through will.

Austere and restrained, this bat hides his eyes under a hood. He represents deep feeling, spiritual authority, and high power. His open book releases a drop of blood, denoting a thirst for knowledge. A very influential mediator, he is an able reconciler. He masters spirits and souls.

Divinatory Meaning: Protection, positive influence, good will. Comprehension, knowledge and perception. Permanent alliances, and a willingness to forgive and forget.

This young vampire bat and his victim represent beauty, youth, and lust of living. The young girl, her head lowered, shows indecision towards the future. She is plagued by thoughts of mortality, old age, and eternal rest versus life and eternal youth. Some sacrifice will be necessary.

Divinatory Meaning: Meeting with a kindred soul; love for two persons, a choice must be made; hesitation about an important decision; beauty and youth, influence over future events, trust in one’s own intuition, options.

It’s a full moon, and the chariot driver is chauffeuring his master bat in his quest for blood. The red curtained coach symbolizes action and movement. The driver guides the chariot confidently to the destination; always in control of his instincts and emotions. Dauntless, he looks for the future victims.

This bat woman is the model of strength and bravery, and helps us regain control of our internal beast. He companion, the black panther symbolizes the destructive and overwhelming strength of primary and carnivorous instincts.

This bat, immersed in meditation, embodies slow, deep, and secret evaluation. He is draped in dark, plain clothes, seeking quietness; it is a slow and constant internal search. Two stone gargoyles hovering above his head give him spiritual wisdom to comprehend mystery and be at one with his ideals.

Ruling the cyclic aspect of things, this card connotes movement, both positive and negative. Everything is fluid, always moving and changing. Embracing the top wheel, the bat embodies constructive energy and renewal. His blood-red tattoo symbolizes evolution and life.

Reverse Meaning: Negative outside influences, unpleasant surprises, missed opportunities, losses, and dispersion of that which is valued.

This bat, with her cold and ruthless stare, thrusts that the straight and narrow laws of the blood kingdom will triumph. Her sword will give reward or punishment by blood, balancing good and evil.

Sleeping, this mystic bat has a certain spiritual power and nobility. Left to his dreams but still aware, his clever conscience makes him receptive to visible and invisible vibrations. He typifies freedom of soul and an ability to go beyond reality.

Though frightening, fate requires that this dead and immobile bat must be acknowledged. Death is a symbol of metamorphosis and rebirth. With her scythe behind her, she tells us to forget old habits, and to look ahead into the future. Death occurs because the former is unable to cross from one state to another, and teaches us how to be born again.

Divinatory Meaning: Freedom from past, a new life; changed perspective, evaluation, new desire, questioning out own principles. Grief and mourning.

Reverse Meaning: Despair, anguish, and pain; hard-to-break habits, the end of a sentimental relationship, a great price to pay.

This bat woman, with an intent gaze, harmonizes with the environment by moderating blood flow. A vital fluid energy source and life component, blood follows a slow but regulated course of regeneration and healing.

Prince of blood, this devil is ready to jump at any moment. He is charismatic, bestial, and passionate. Powerful instincts are his weapon. He personifies forbidden pleasure.

A castle standing in the middle of lightening depicts destruction, conceit, and intense power. The bats give it a gloomy atmosphere, warning us not to dawdle. The card shows that evil is the necessary complement of good, and that humankind is but one part of the universe.

Divinatory Meaning: A warning of unexpected events, explosive situations, painful but necessary changes, instant love or crisis in a relationship, self-criticism and doubt.

This calm-faced bat woman exemplifies charm and perfection. She is there to guide. Her crystal star beams down towards the blood in her hands and she creates a delicate balance between spiritual and material: subconscious revitalization.

This sensual bat woman is mysterious and dream-like. She, like the moon, is a symbol of womanhood and exploration. Yet she also has certain darkness and informal nature. Queen of the night, and aware of hidden forces, she implores us to face the depths of our inner world, and to pay attention to our intuition and instincts.

The brightness of the sun bears down upon this bat, making him one of the worst enemies of the bat kingdom. Like the others, he hates its light, but the sun represents the vital male principles of pride and nobility. The glow warms human hearts and dispels darkness. Under its protection, man become invincible against bats.

This bat, half man/half angel, looks as if he is about to swoop down and consume his prey. Instead, he is the messenger, the judge; he brings the truth. He symbolizes the unexpected, showing us that we must awaken out consciousness; that we must accept the truth, and learn how to be aware.

The best tarot card. The world is dominating and triumphant. His bloody teeth symbolizes time and eternal life; he will teach his future victims how to perpetuate themselves and accomplish glory in the world. They will know the apotheosis, the fulfilment of creation, the thrill of conquest of universal life. These female prey are symbols of fertility; a source of rebirth through blood for their predator.

The Drawing of the Day

This is a spread you can do each morning, as a way to be attuned to your personal vibrations for the day ahead. Using only the 22 Major Arcana cards, shuffle and cut them, then choose 3 cards to be placed in the pattern shown below 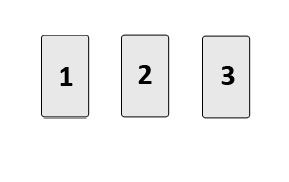 With this spread, you can govern yourself accordingly throughout the day, and avoid conflicts, if necessary)

This is the most popular spread. It’s purpose is to answer a definite question (regarding love, profession, money, or health). Shuffle and cut the 22 Major Arcana cards, then select 4 cards, and place them as shown in the image. 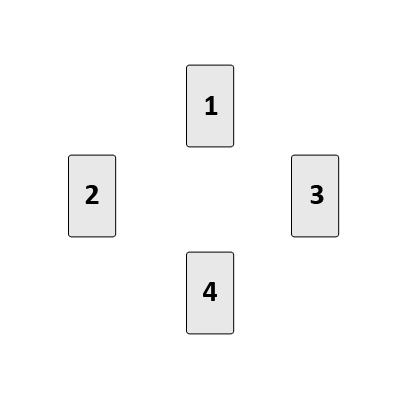 There is a fifth card, called the synthesis (it can be the key to the situation). If you want to know which card it is, add the face values of the cards you have drawn. When it is greater than 22, you must reduce it to a single figure. Here is an example of how to do it:

If adding the cards give you an exact total of 22, it is considered to represent the Fool card. If you are unsure about one or several cards, you can put one Minor Arcana card over each of them, to be chosen after shuffling and cutting the Minor Arcana cards. The additional cards can further explain the situation and it’s meaning.

This spread is used to learn the evolution of a particular situation. Shuffle and cut the deck, then place ten cards as shown in the image. 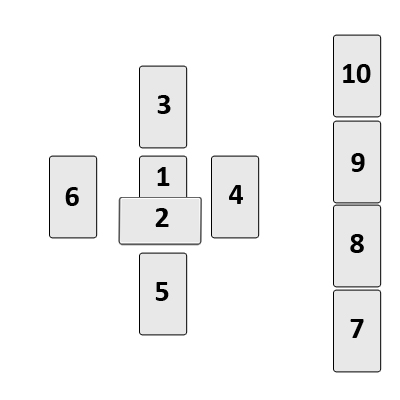