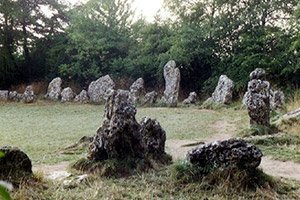 The Rollright Stones are a set of three monuments located very close to the village of Long Compton. The three monuments are known as The King’s Men, The King Stone and The Whispering Knights.

A single standing stone set across the road from the other two monuments. I could not find any information about this monument at the location.

I visited the Rollright Stones because I heard that people were having problems with their camera’s while attempting to take photos in the stone circle.

The King’s Men, is a stone circle of different sized and shaped stones. Apparently it’s impossible to count the number of stones in the circle.

During my visit, I when was taking photos with my camera, the battery went from full charged to empty in a matter of seconds. When I got back home I turn the camera on and had 100% battery life. This was very odd, however I am glad it happened because that was one of the reasons I visited.

This monument seems to be a burial chamber with 4 upright stones and a fallen capstone. During my visit I spotted a few coins and rings that I can only assume were left in tribute.

There is a story of a king and his troop traveling through the countryside, where on this spot they meet a witch. The witch spoke to the king and told him that if he could take seven strides and see the village of Long Compton he would be the true king of England.

He sent his men to a nearby field to make camp, then attempted the strides. Upon failing to see the village, the witch turn the king to stone. She then turned his troop to stone: the group of men that had now formed a circle around a fire and the group of conspiring knights is the distance.

“Seven long strides thou shalt take, says she
And if Long Compton thou canst see,
King of England thou shalt be!”

Read more about the Rollright Stone on official website