Mythbusters - Failure is Always an Option…

Who are the Mythbusters? 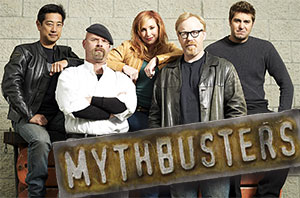 And don’t for forget Buster

This crack team of special effects masters don’t just tell the myths they put them to the test. The team try to find any truth in myths, often these are trying to see if a stunt in a movie or on internet can be achieved.

“That’s Why We Can’t Have Anything Nice.”

Most of the episodes involve destroying cars, blowing stuff up (with an array of substances) and trying to find out what’s bulletproof (excessive gun/cannon use).

My favourite Mythbusters episodes include: