Legend - Is Your Love Strong Enough? 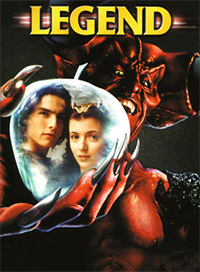 In a world where magic, fairies, goblins and unicorns exist, Jack a child of the forest is visited by Lili a Princess in the human world. Lili is fascinated with the world that Jack lives in and wishes to be a part of it.

Elsewhere evil is plotting… Darkness, the once ruler of the world in a time before light and love, grows tired of his confinement and wish to rule again. He sends out a goblin to destroy the protectors of light, Unicorns.

Princess Lili: Are you afraid to kiss me, Jack?
Jack: I’m afraid you’ll break my heart.
Princess Lili: Then still your heart, for you are dear to me as life itself.

One of the more famous films for having multiple versions and 2 separate soundtracks. The original soundtrack was created by composer Jerry Goldsmith, but during the initial test screenings, Universal Pictures chose to remove the original score and commissioned Tangerine Dream to create a replacement in an effort to appeal to a young audience. Also during the screening Ridley decided to cut the film from 150 minutes to 98.

Overall there are at least four versions of this film:

I don’t really have a preference, but if I was to watch a version now, it would be the Director’s cut version followed by the American theatrical release. I do enjoy the soundtrack by Tangerine Dream, but would always prefer the original soundtrack by Jerry Goldsmith.

Tim Curry’s performance along with his make-up is amazing, I can’t imagine any other actors fitting the role so well.

There are lots of scenes where you can tell that Ridley Scott took inspiration from Beauty and the Beast and Snow White and the Seven Dwarfs. The film is trying to be a fairy-tale for adults (darker with more intensity), which I find it achieves, but is still suitable for all ages to enjoy.

If you have not seen this film, I recommend you find a way, you will love getting lost within it.

The Lord of Darkness: What is light without dark?