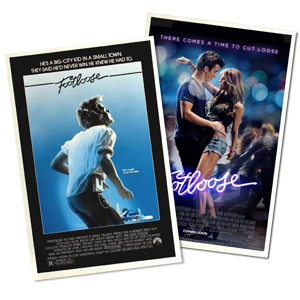 If you have read my blog before (Not Another Remake), you will know that I’m not a fan of remakes. That said Footloose (2011) does hold true to the original. The story is basically the same with a few slight changes, a few of the more iconic outfits are reprised and cover versions of the original songs are used.

The more memorable scenes are included but changed in a way that I don’t think they should have:

The diner scene
I hate the current wave of dance movies that include one of these dance-off scenes to show off dancing styles.

The chicken-dare scene
Footloose (1984) version is a lot better, at any point Ren could have chickened out.

The out-of-town dance scene
Yee-Haw let’s have a Barn Dance.

Dennis Quaid as Rev. Shaw Moore and Andie MacDowell as Vi Moore were very good casting decisions, I think that they played the characters very well. However Kenny Wormald as Ren MacCormack and Julianne Hough as Ariel Moore were not very good.

In the original film Rev. Shaw Moore played by John Lithgow had a much bigger role. The 2011 version seems to have streamlined the story cutting out a lot of scenes showing how big a part Rev. Shaw Moore plays in the community. Even the book burning scene which I believe to be a turning point in the reverends character has been cut.

Overall if you have never seen Footloose (1984), why not? Footloose (2011) will at least clue you in to the story and be a good enough representation of what everyone that has seen the original has experienced.