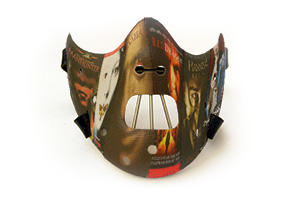 He uses his immense mental ability to manipulate and frighten, you could say he has a colourful way with words.

Hannibal Lecter: A census taker once tried to test me. I ate his liver with some fava beans and a nice chianti.

Hannibal does not kill for pleasure or necessity, he kills only those who exhibit poor taste or bad manners. He throws dinner parties where he lays on elaborate feasts serving up his victims.

Hannibal has appeared in the following films (ordered by release date)

While incarcerated in the Baltimore State Hospital for the Criminally Insane, Hannibal receives a visit from his old friend, the person that caught him, FBI special agent Will Graham.

During conversations with Hannibal, Will discovers the identity of a serial killer he is pursuing.

A few years later, Hannibal is visited again. This time by FBI trainee Clarice Starling. The FBI sends Clarice to gain information on the current case of a serial killer known as Buffalo Bill.

Hannibal becomes interested and gives Clarice cryptic clues in return for painful memories of her childhood. The clues once understood by Clarice enable her to discover the identity of the killer.

Silence of the Lambs IMDb page

Hannibal reappears in Florence, Italy, using the name Dr Fell. He positions himself as a prominent but reclusive historian and lecturer.

Hannibal is discovered by a local policeman, who attempts to sell him to Mason Verger (Hannibal’s only surviving victim). Hannibal escapes and returns to America to seek out Clarice Starling. Clarice had never given up on her hunt for the renowned psychopath. Lost within his games with Clarice, Hannibal becomes captured by Verger. Now Clarice has a choice to leave Hannibal to his fate or rescue him in order to bring him back to prison.

While incarcerated in the Baltimore State Hospital for the Criminally Insane, Hannibal receives a visit from his old friend, the person that caught him, FBI Special Agent Will Graham.

During conversation with Hannibal, Will discovers the identity of a serial killer he is pursuing.

Hannibal was born on August 7, 1944 in Lithuania at the end of World War II. When the war was ending, Nazi turncoats sort to hide on the vast estate his family owned. Hannibal and his younger sister Mischa were kept as hostages.

During the harsh winter, running out of food, their captors lured Mischa away from Hannibal, killed her and cannibalised the flesh. Upon realising what had happened to Mischa, so distraught that he had failed to protect his sister, Hannibal was rendered mute. He later escaped and hid in an orphanage.

His Uncle and Japanese wife, Lady Murasaki discovered Hannibal and took him into their home to raise him. Obsessed with revenging his sister, Hannibal decides to hunt down, torture and kill every man who caused her death.

Hannibal the now prominent psychologist, living in Baltimore is approached by the FBI to evaluate a young agent, Will Graham.

Interested in Will’s special ability of getting into the minds of serial killers, Hannibal passes Will’s evaluation and suggests that he monitors him. Utilising the insight that he receives from Will and the FBI, Hannibal resumes his cannibalistic ways.