Are You in the Mood for a Slasher Film? 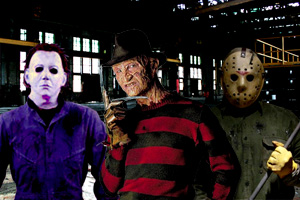 What is a slasher movie?

The name of this horror sub-genre gives a bit of a hint as to what you can expect in the films it classifies. They tend to focus on a psychopathic killer on a serial rampage, with the weapon of choice usually some sort of knife or cutting weapon.

Halloween is amongst the first slasher films, laying down some of the elements that are now staples of this cult sub-genre.

Likely elements within such films include:

Slasher films peaked in around 1984 with the release of ‘A Nightmare on Elm Street’. Later, the sub-genre was revived by Wes Craven and spawned some new films and re-makes.

I personally hate spoilers, but the films listed below have been around for a while and the characters are well established. Forgive me if by reading this blog your enjoyment of watching these films is spoilt - but you can’t say I didn’t warn you… 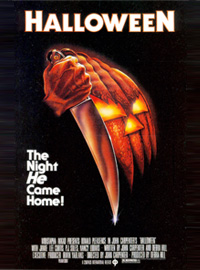 No one is quite sure what triggered Michael Myers to turn into a homicidal maniac, hell-bent on killing his family. On Halloween 1963 in Haddonfield, Illinois, the 6-year-old Michael Myers flipped, brutally killing his older sister by stabbing her repeatedly with a kitchen knife. Michael then spends the next 15 years locked in a hospital in Smith’s Grove, only to escape on October 30th to hunt down and kill his younger sister on Halloween.

The series then continues with Michael trying to kill almost every member of his family, along with anyone that gets in the way.

Since his first kill Michael’s choice of weapon has been a large kitchen knife. After his escape from hospital Michael steals a Captain Kirk (William Shatner) mask and blue overalls – his now infamous signature outfit. As an adult Michael is effectively mute. He moves slowly, appears to be immortal and has been shot many times. Whether this is because he is immune to pain and deals with the damage between Halloweens is anyone’s guess.

During ’Halloween: Resurrection (2002)’ the house where Michael Myers grew up is being kitted out with video surveillance cameras. When one of the crew goes to adjust a camera Michael appears and uses the tripod leg to impale the guy. As Michael puts the camera and tripod back into place he chillingly takes care to set it up at a perfect angle. 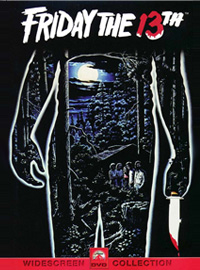 Upset by constant teasing from the other children at Camp Crystal lake, Jason went out to the water to prove to himself that he could swim. With the camp counselors neglecting their duties, Jason was never recovered from the lake and was presumed to have drowned. On the 23rd anniversary of his demise, however, it is implied that Jason returns as a grown man only to witness his mother being beheaded following her murderous rampage in revenge for his supposed death.

We first see Jason wearing a sack over his head with only one eye hole. It’s not until the third film that he trades up to his now iconic hockey mask. He prefers to use a machete, however he doesn’t mind using whatever weapon he finds readily available.

Jason is another antagonist that seems to be immune to pain / invulnerable - except for an almost pathological fear of water.

My favourite Jason Voorhees kill has to be one of the more recent ones. Featured in ’Freddy vs. Jason (2003)’, Jason is hiding in the bedroom of a couple that have just had sex. While the girl goes to the bathroom Jason decides to fold the bed in half while it is being occupied by the unsuspecting guy - with grisly consequences.

A Nightmare on Elm Street 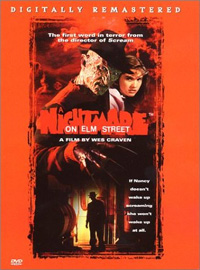 It’s the stuff nightmares are of made of. Fred ‘Freddy’ Krueger was a child killer working in a steel mill on the outskirts of Springwood, Ohio. After being acquitted of kidnapping and murder charges because of an administrative error, he was chased down and burned to death by an angry mob of parents. Freddy now haunts the dreams of the children of Springwood, turning them into nightmares they do not return from.

Freddy has a hand-crafted glove with blades running down the fingers - giving him a very sharp handshake. He wears a grubby red and green sweat shirt and a dirty brown hat.

Later we learn that his mother was a nun who became trapped inside a wing of a mental hospital during Christmas. She was beaten and brutally raped by the inmates, and when finally rescued she was barely alive and pregnant. Freddy was thus bestowed the nickname of ‘the bastard son of 100 maniacs’.

My favourite Freddy Krueger kill is in ’A Nightmare on Elm Street 3: Dream Warriors (1987)’ when a sleep-deprived teenager in hospital is trying to stay awake while watching late-night TV. Inevitably she falls asleep, and Freddy lures her towards the TV by making the picture appear fuzzy. The TV then sprouts Freddy’s arms, claws and head before he picks the girl up and smashes her head through the set. “This is it Jennifer, your big break in TV, fuck the prime time bitch”.

Who is my favourite slasher anti-hero?

Out of the three characters described above my favourite anti-hero has to be Freddy Krueger - I love some of the lines he comes out with as he kills people. Yes, I know that some of the films were a bit silly and sometimes didn’t really make sense, but Freddy’s irreverent and macabre humour always make the films worth a watch.

Which slasher film would I choose to watch?

It has to be Halloween. The films follow a very defined storyline - Michael Myers trying to eliminate his family. I say this with the exception of Halloween III: Season of the Witch (1982), which seems to be a slapdash attempt at maintaining the release of a horror film every Halloween (this film actually features Halloween (1972) on TV).

More from the slasher film sub-genre

Hopefully this has wet your appetite for some horror. If that’s the case, I’ve listed a few other films that fit within the same classification: